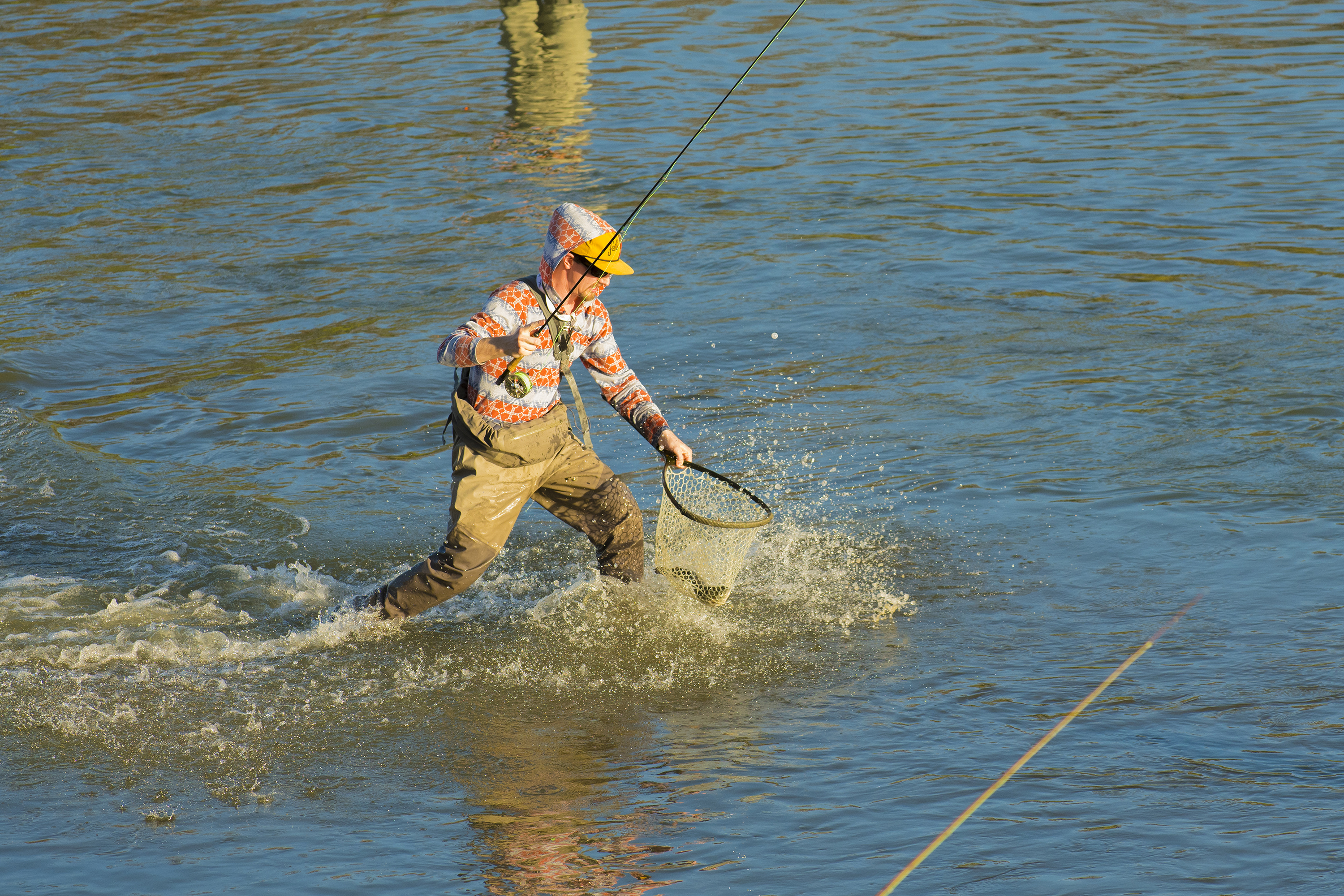 Tarrant Regional Water District (TRWD) presented the fourth annual TRWD Flyfest last Saturday, March 9th in and along the Clear Fork of the Trinity River near the Acme Brick Headquarters. From beginners to people with expert fly fishing skills, TRWD Flyfest delivered a day full of family-friendly fun for everyone.  With temperatures in the 70’s, it was a great way to kick off springtime on the river!

To start the morning off, anglers lined up early before registration opened to get their spot in the Big Trout Contest.  Luckily, Buon Giorno Coffee Trike was on hand selling coffee for the early birds! The eighty available spots between the four heats were quickly at capacity. 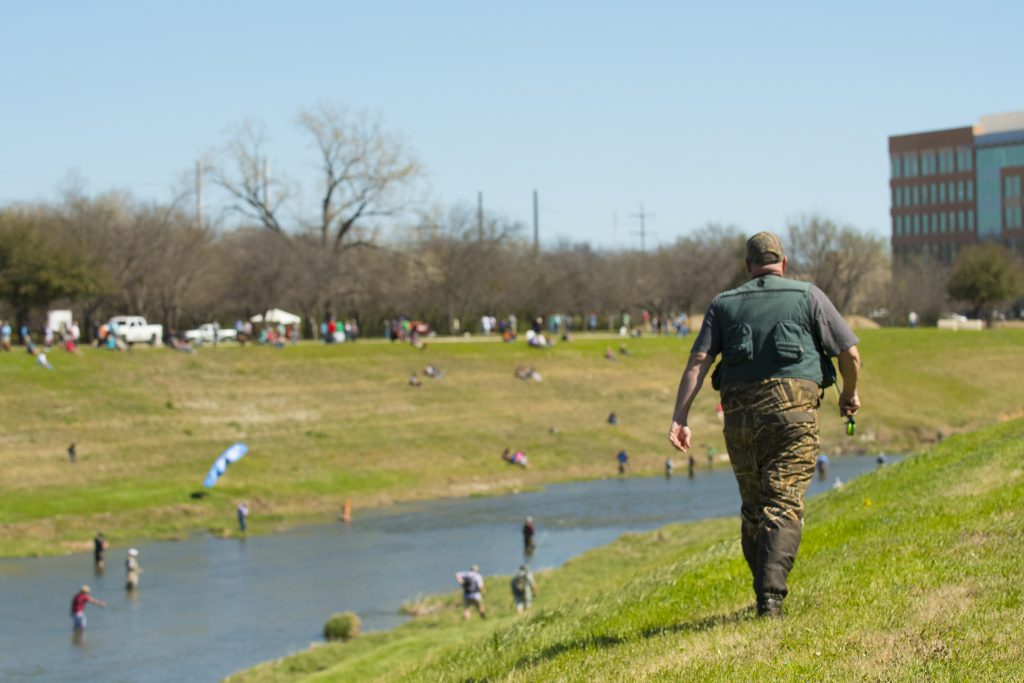 To create the best angling experience, TRWD released 1,600 lbs. of Rainbow Trout and nearly 3,000 Texas native fish in the festival location. The Texas native fish are part of an annual stocking program that TRWD is carrying out in partnership with Texas Parks and Wildlife. The festival provided an area for the Big Trout Contest as well as designated areas for open fly fishing and open bait fishing.  The public is encouraged to go out and fish the trinity after the stockings and any time of the year to take advantage of this wonderful recreational asset.

For those that wanted a hands on experience, casting classes and fly tying lessons were available. Over 80 people enjoyed casting classes which focused on beginner and intermediate skills. Experts from all over the state provided fly tying classes using a camera and projector offering an up close look at the process.  In addition to featured speakers, festival goers could come and go and mingle around the room for one on one time with the different experts on various fly tying patterns.

Not only did people learn how to fish, they also learned how to cook a fish. Outlaw Chef Terry Chandler of Fred’s Texas Café provided cooking demonstrations throughout the day. In addition, Fort Worth ISD North Side High School and Polytechnic High School Culinary Arts program chefs joined the event to also showcase their talents.

Besides enjoying the great weather, the festival also included food, wine tastings from local wineries, craft beer and live music. In line with the seafood theme, Crawfish Connection was on site serving up mud bugs.  Boar B Que and Rollin’ Stone were also onsite serving up yummy grub.

Festival goers were also reeled in by Fort Worth’s favorite Big Mike who played an acoustic set of everyone’s favorite tunes throughout the day.

While parents enjoyed a glass of wine or craft beer, the kids were all smiles while participating in free activities like face painting, a kid fishing tank, big jenga and a rock climbing wall. 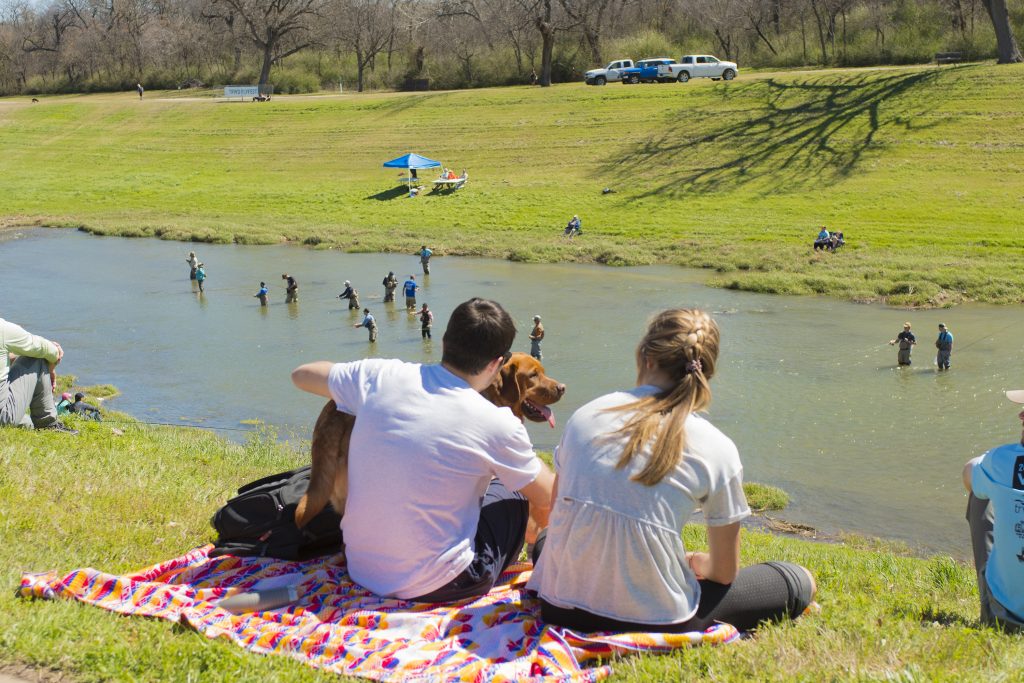 TRWD Flyfest would not have been possible without the generous support of the sponsors including supporting sponsors – R4 Foundation, Backwoods, Acme Brick, Texas Council of Fly Fishers International, Fort Worth Fly Fishers, Fred’s Texas Café, 95.9 The Ranch, Fort Worth Magazine, and Clearfork.  Contest Prizes were donated by Mariner Sails, Fatties on the Fly, Overstocks and Bargains and Flying Fish. Hilton Garden Inn, Empire Disposal and Whole Foods also contributed in-kind supplies to the event.  TRWD appreciates the support of the community for recreation on the Trinity River!

Tarrant Regional Water District has been providing communities with reliable and sustainable water supply, vital flood protection and a variety of recreational opportunities for more than 90 years – including TRWD Flyfest on your Trinity River. 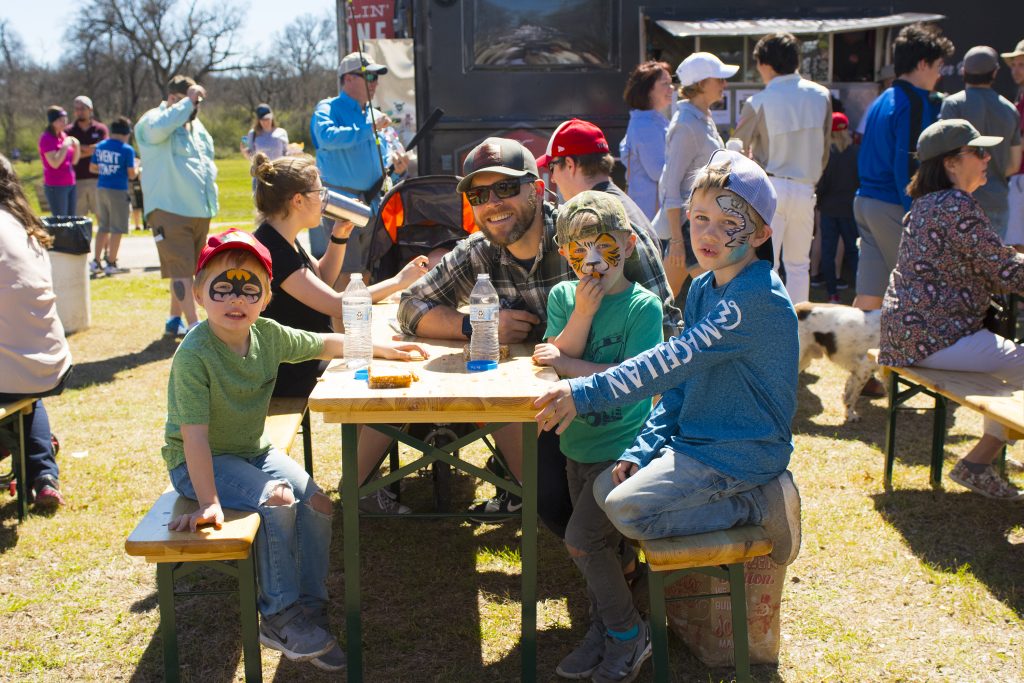 Beating last year’s score, Grey Kohn won the distance contest at 93’ 6”. Winning the accuracy competition at 130 points was Russell Sharp. Both Greg and Russell won a Fly Box that was generously donated by Fatties on the fly.

Adam Tate and Angela Tate came home as heat winners catching eight fish during the contest. Not only were they the heat winners, but Angela also won the biggest fish for Heat 1 at 21 ¼ inches.  It was a gorgeous Golden Trout!

The winners for heat 2 were Minh Tran and Doyle Wells netting two fish and Steve Nguyen caught the largest fish at 19 inches.

With two fish caught, the winner for heat 3 went to Nolan Tatum and Bryce Bezant. Jonathan Ringler was awarded the biggest fish caught in heat 3 at 18 inches.

The winners of heat 4, catching eight fish, went to Guillaume Seon and Madhavi Raheja. The biggest fish caught for Heat 4 went to Jonathan Medellin at 22 ½ inches.

The Grand Prize for Most Fish Caught was decided by a fish-off between two couples! The tie breaker was between Heat 1 and Heat 4 winners who each caught eight fish in the initial round. The team that caught the most fish in 20 minutes would be the grand prize winners. Guillaume Seon and Madhavi Raheja of Heat 4 went up against newly-weds Adam and Angela Tate, winners of Heat 1.  Guillaume and Madhavi netted 5 additional trout making their total catch for the day twelve trout, edging out the Tates who pulled out 2.  Guillaume and Madhavi each went home with $200, a life jacket provided by Mariner Sails and a trophy for bragging rights.

Between each heat and the fish off, contestants netted a total of 55 trout throughout the day. In addition, event guest speaker and member of the US Youth Fly Fishing team Martin Dietz netted an impressive 9 fish in 45 minutes in an exciting crowd demo. 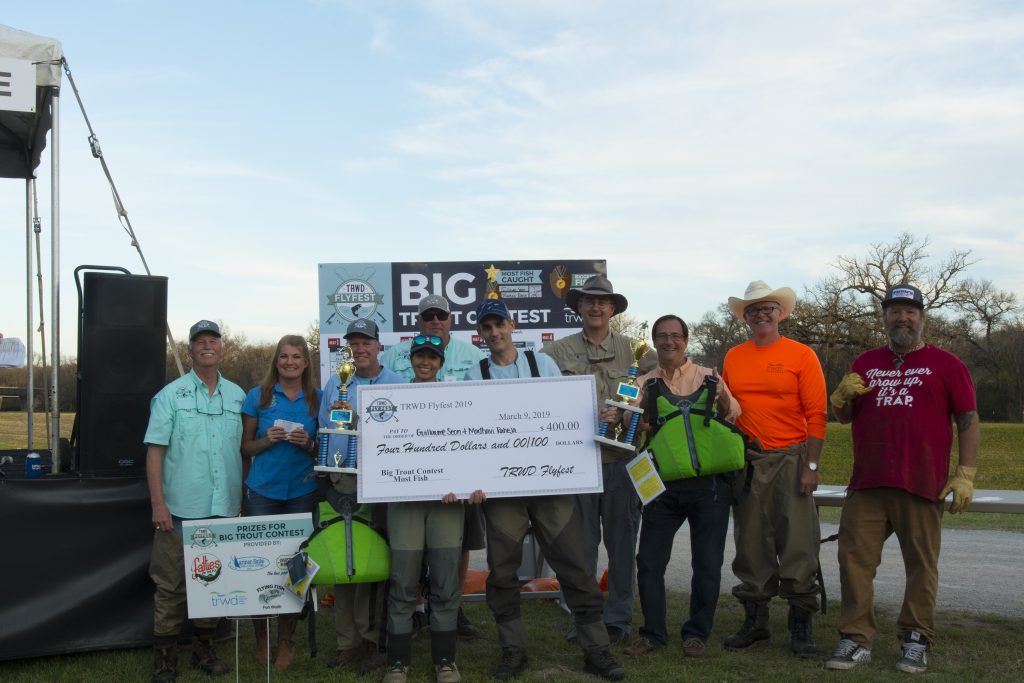