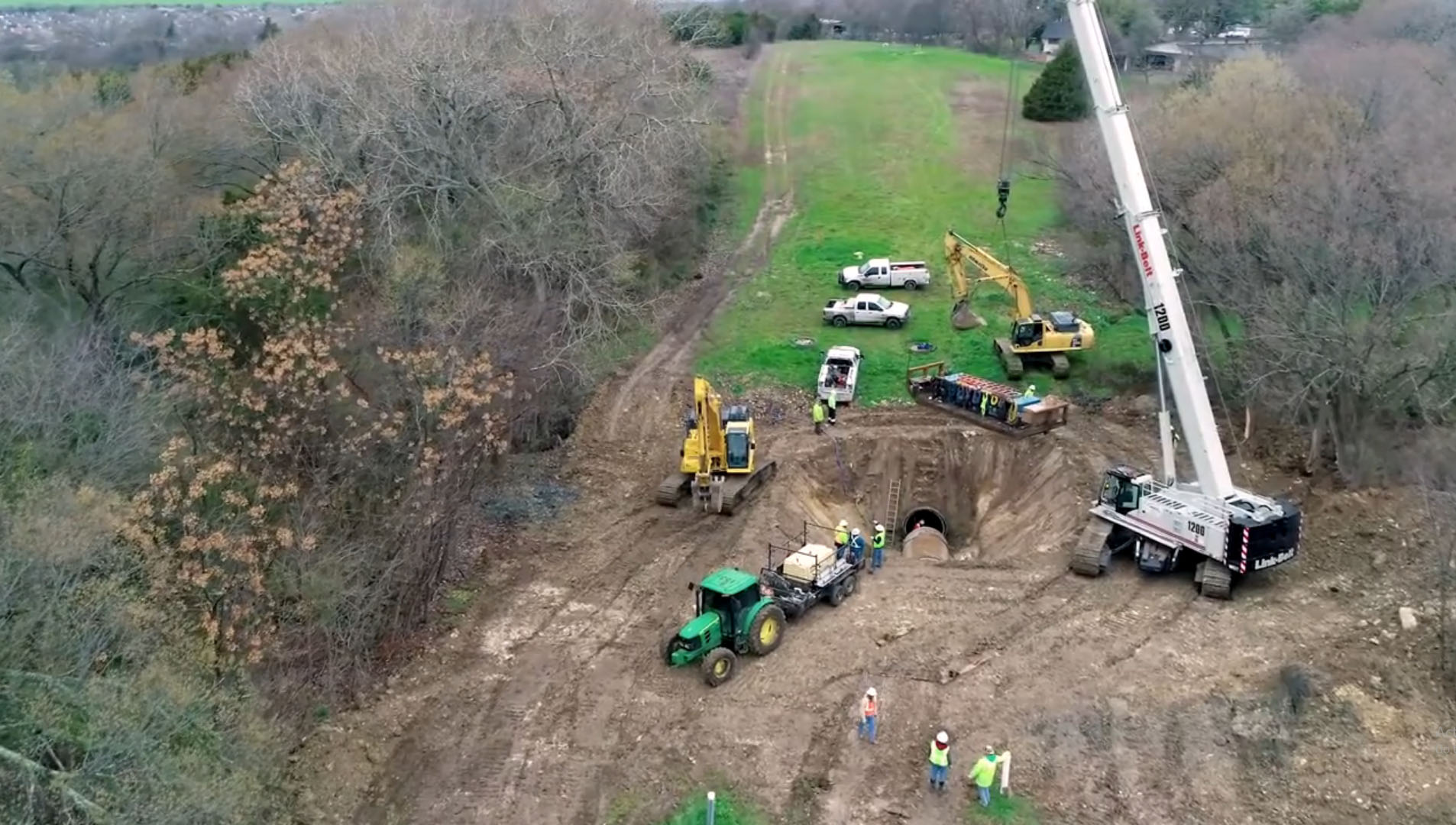 The men looked like they were going spelunking in their helmets, headlamps and harnesses.

But as a heavy metal lid slipped off a manway cover, and the crew climbed five feet underground down a narrow ladder with their bundles of equipment – disappearing into a dark, damp pipe – it was clear that they were not going to look at stalactites.

Instead, the crew, once inside, assembled a device called the PipeWalker, a wheeled platform that includes an apparatus that emits an electromagnetic signal to estimate the number of wire-breaks in a pre-stressed concrete pipe and determine the structural capacity of the pipe.

The PipeWalker is just one example of the cutting-edge technology and practices being used by the Tarrant Regional Water District in a robust and industry-leading pipeline integrity program.

Keeping the system flowing – bringing water to more than 2 million people living in 11 North Texas counties that include the cities of Fort Worth, Arlington and Mansfield – requires an intimate knowledge of the pipeline and knowing where work needs to be done and when.

“It is basically the opposite of out of sight and out of mind,” said Jason Gehrig, director of infrastructure engineering for the District. “Yes, the pipelines are below the ground and out of sight, but they are certainly not out of mind.”

“We have more than $1.5 billion of infrastructure in the ground and we have a robust program to protect it,” he said.

The District conserves water, saves millions in maintenance costs, and protects against catastrophic failures – and interruption in service – by inspecting its pipes and prioritizing repairs. The program has been so successful that one line hasn’t seen a major failure since 2016.

“I know TRWD is one of the first utilities to trust in the electromagnetic technology when it was introduced,” said George Schaaf, project manager for Pure Technologies, the Canadian company that worked with the District to develop the technology. “TRWD definitely is ahead of the curve in maintaining their infrastructure.”

There’s a lot of infrastructure to look after.

The District uses a system of lakes and pipelines to provide water to more than 30 wholesale customers in North Texas. It owns four lakes – Bridgeport, Cedar Creek, Eagle Mountain and Richland Chambers – and maintains about 290 miles of pipeline. It also stores water in Lake Arlington, Lake Benbrook and Lake Worth for future use.

The District also is building, with the city of Dallas, the integrated pipeline. This massive steel pipe project will be used to bring water from East Texas to the Metroplex.

The 74-mile long Cedar Creek was constructed in the early 1970s and the 79-mile long Richland Chambers line in the late 1980s. Both used prestressed concrete cylinders – or pipes made stronger by tendons of individual wires or cables running through them.

But as the Cedar Creek and Richland Chambers pipelines aged, they started to experience problems. The corroding metal mesh embedded in the concrete was a primary cause of the failures.

The Cedar Creek pipeline was particularly troubled because of its age and the pipes were manufactured when industry standards for the metal mesh in the concrete were not as rigorous. Over about 10 years, it had seven failures starting in the early 1980s.

Richland Chamber suffered 10 failures from the late 1980s to the early 1990s.

When a section of pipeline ruptures, it is shut down. But the District, to avoid interruption in service, will use an alternate line as a backup. The Richland Chambers and Cedar Creek pipelines run parallel to each other for two thirds of their length.

Still, projections indicated that failures along both lines were expected to come more frequently. The District couldn’t afford, in more ways than one, to simply replace all of the pipe at once. It would be a massive undertaking. It was the kind of thing that kept officials awake at night.

“We had failures that were catastrophic in nature. There is a lot of energy in this pipe, so when it failed, it was a significant event,” Gehrig said.

Something needed to be done

So, starting in the mid 1990s, the District attacked pipeline integrity in four ways.

It originally installed a cathodic protection system to protect the pipe’s wire wraps from corroding by connecting small metal devices called anodes to the wires, and then sending through a small electrical current.

They kept a closer eye on conditions near its pipelines to protect it from external threats such as making sure no one accidentally damaged or drilled into the line.

The biggest impact came in its inspection regimen and its risk-based pipe replacement program that keeps a close eye on the state of the system and where repairs are most needed. The District now tries to inspect each pipe every five to ten years for planning purposes.

To determine the condition of its pipes, the District worked with Pure Technologies to develop a device that can be pulled through its water mains to estimate the number of wire breaks. The equipment does this by sending electromagnetic signals through the pipe’s surface to discover how many of the metal wires embedded in the concrete have broken or become brittle, determining the remaining strength of the pipe.

Not all wire breaks are created equal. Where pipe is under greater pressure to push the water 70 to 80 miles away, like near the reservoirs, having 25 breaks is a bigger risk than having similar problems within a pipeline under less pressure and closer to the delivery point.

While the initial electromagnetic equipment was not as sleek as the ones used by Pure today – it looked more like a bunch of spare computer parts loaded on a big Radio Flyer red wagon – the inspection data revolutionized how the District maintains their pipeline systems.

“Getting the Pure inspection data really helps us know what is going on in our system,” said Courtney Jalbert, Infrastructure Integrity Manager for the District. It almost helps them predict a water line break.  “The structural model tells us if we are going to have a failure.”

“The results of this program is that we’ve reduced the failure rates dramatically for Cedar Creek and for Richland Chambers,” Jalbert said.

Layered on top of the data on where potential problems may be, Jalbert said the District about five years ago began doing risk modeling. Is the pipeline in an open field, or is it near a railroad or business? Is it near a creek and hard to access? This will help determine where to go first for replacement and repair.

“We use probability of failure times the consequence and that gives us a risk number for every pipe in the system,” she said.

Approaching repairs in this way saves millions of dollars. While the District replaces 15 to 20 pipes a year, the price tag for making repairs at problem spots is a small percentage of what a full water line replacement would cost. Replacing a 24-foot, 72-inch pipe can cost up to $50,000, compared to spending up to $80 million on installing 10 miles of pipeline.

“It has extended the lifetime of our pipelines for decades, deferring tens of if not hundreds of millions dollars in expenses,” said Dan Buhman, Assistant General Manager for the District. “But more importantly it has made the pipeline more reliable by avoiding pipeline failures.”

“It is a critical component of us making sure the public never runs out of water.”