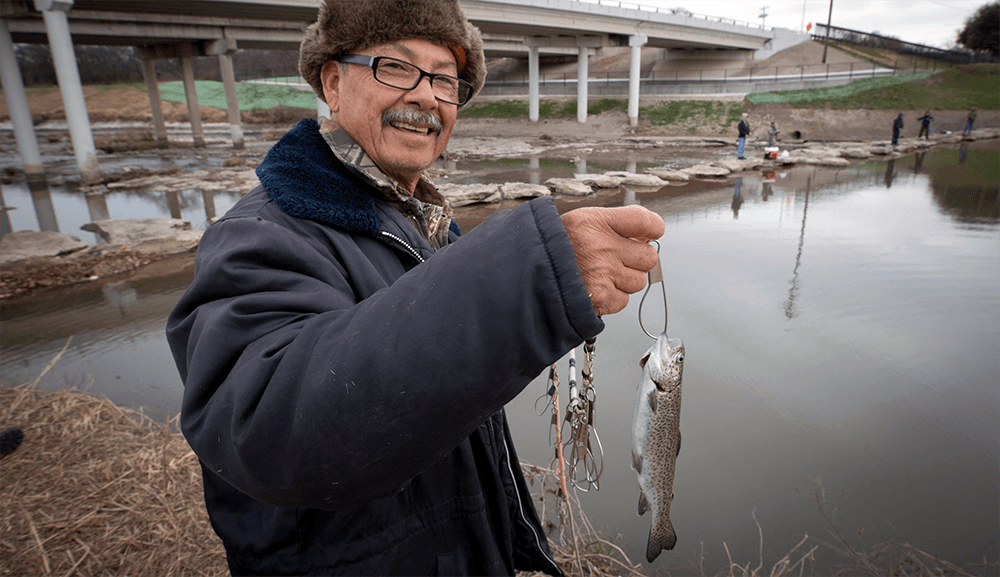 “Fish and shellfish can accumulate contaminants from the waters in which they live. The Texas Department of State Health Services (TDSHS) monitors fish for the presence of environmental contaminants and alerts the public through bans (closures) and advisories when a threat to human health may occur from the consumption of contaminated fish. In waters with consumption bans, possession and consumption of fish and/or shellfish is prohibited. A consumption advisory is a recommendation to limit consumption to specified quantities, species and sizes of fish.” -Texas Parks & Wildlife

So you ask, is it safe to eat fish from the Trinity River? The short answer is YES! Texas Parks & Wildlife reports that the Trinity River in Fort Worth is no longer under a ban. However, it is still under a consumption advisory.  Similarly, it is not advised to eat blue catfish, channel catfish, or small buffalo from Lake Worth. Luckily, for those angling for adventure – there is no limitation for fish stocked in either area.

The contaminants are not harmful to handle, but can be if consumed in certain quantities. Believe it or not, the fish are actually helping make the river and lake cleaner every day.  Generations of old contaminants still reside on the lake and river bottom.  The contaminants just sit there until first consumed by little bottom feeders. The contaminants then begin to build up in the smaller fish.

Contaminants increase in quantity when larger fish eat the smaller fish.  At a certain point, fish can build up enough of a contaminant that exceeds the threshold that TDSHS recommends for consumption.  The good news is that these fish are picking up the bad stuff and taking it further downstream every day.

[/fusion_text][fusion_text]The fish in the Trinity River are above the threshold that TDSHS recommends for consumption.  Contaminants are present and could build to become a health hazard if too much is introduced to your system.  To reach an unacceptable level would require you to eat one fish from the Trinity every week for more than 30 years.[/fusion_text][fusion_text]
We firmly believe that even a bad day of fishing beats a great day at work any day.
In the meantime, catch and release good friends, catch and release our great river healers and enjoy that peaceful time on the banks of our Trinity River.
[/fusion_text][/fullwidth]
Love0 Share Tweet Share 0 Share Pin
Next Post