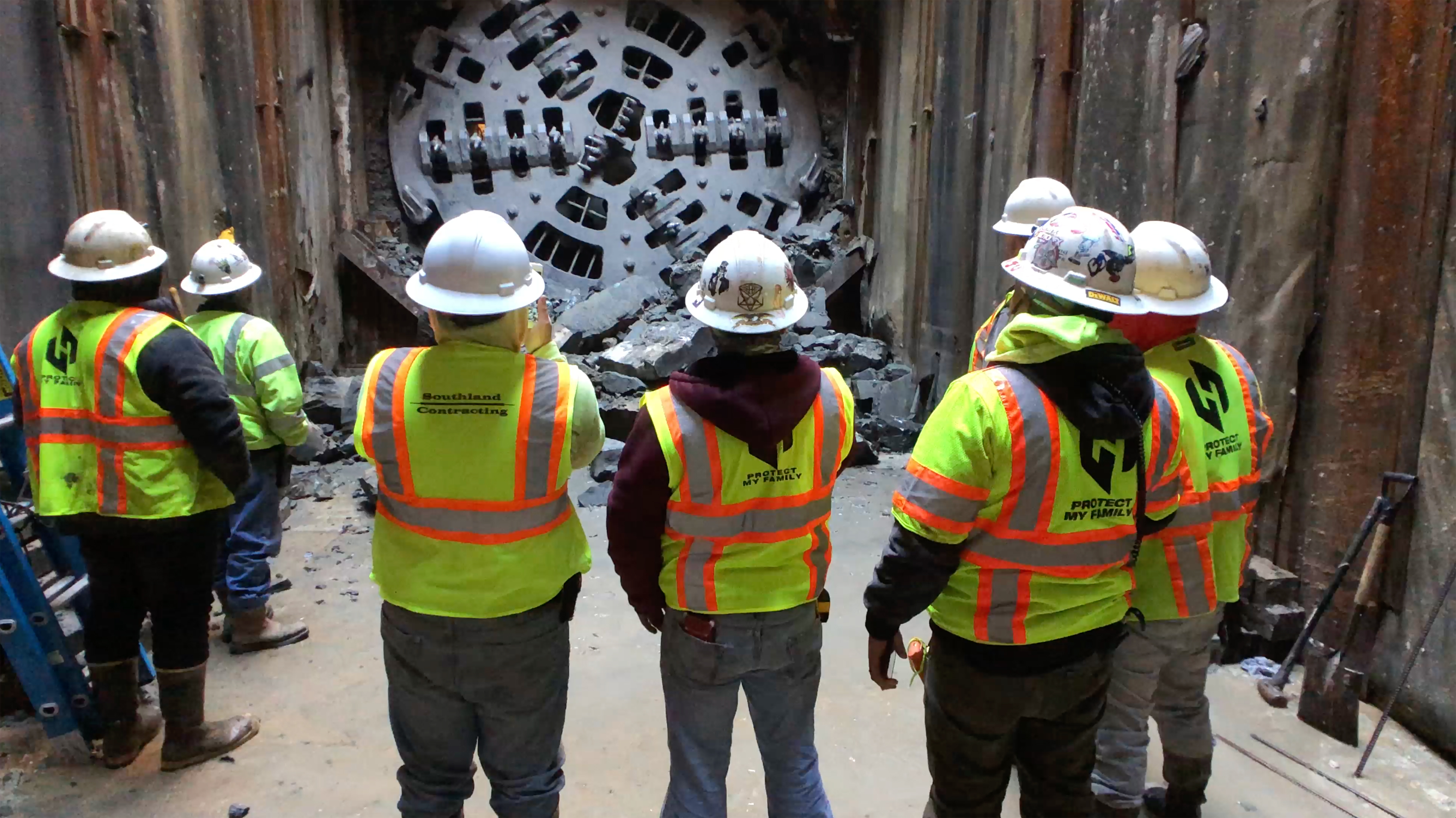 It’s challenging enough to build a 150-mile-long pipeline from East Texas to the Metroplex. To run part of it through a tunnel underneath the Trinity River? Well, that’s a whole other story.

But that’s exactly what the Tarrant Regional Water District did when it recently bored a nearly 5,000-foot-long tunnel below the Trinity River near Trinidad.

Completing a tunnel that is down 160-feet and 15-foot in diameter is another landmark in building the $2.3 billion Integrated Pipeline Project that will bring hundreds of millions of gallons of water from three East Texas reservoirs to Fort Worth and Dallas.

“It was a pretty challenging part of the project,” said Ed Weaver, Integrated Pipeline Program manager for the District. Soil conditions and natural faults only made the project more difficult.

“It was a milestone. It was a very challenging project for the contractor. When they broke through on the east side (of the river,) that was a big deal,” he said. Watch the massive drill in action.

The district is on schedule to complete the second phase of the mammoth pipeline project by the end of the year – connecting the IPL to the current lines running from Richland-Chambers and Cedar Creek reservoirs and boosting the pipelines’ capacity.

So far, about 81 miles of the pipeline is in the ground with 69 miles already being used every day, Weaver said. The pipeline varies in size from 84 inches to 108 inches in diameter.

The IPL is being built in partnership with the City of Dallas. When the total system is completed it will connect three water supply reservoirs – Lake Palestine, Cedar Creek and Richland Chambers – to Lake Benbrook for the TRWD system and near Joe Pool Reservoir for the Dallas delivery point. The Dallas utility is paying for about half of the project.

The District is responsible for building and operating the pipeline and will have the capacity to get 200 million gallons of water a day from it, while Dallas can take up to 150 million gallons a day. With the agencies already serving more than 4 million people, the IPL will make it easier to accommodate growth.

Originally proposed in 2006, construction on the pipeline began in 2014. So far, the District and Dallas have spent $1.13 billion on the IPL.

“I’m honored that I get to operate this system,” said Rachel Ickert, water resources engineering director for the District. “It gives us a lot of challenges, but it also gives us a lot more opportunity and flexibility to serve our customers.”

It would be hard to find anything more daunting than burrowing beneath the Trinity River.

First, there was getting a tunnel boring machine in place. The contractor built a massive shaft – 160-feet-deep, 45-feet in diameter – on the west side of the Trinity River. Through that passageway workers dropped the machinery in piece by piece for assembly underground.

Eventually, the machinery started its slow grind. It was guided by GPS to make sure it reached its desired destination 2,800 feet away and on the other side of the river – with 150 feet or so of the tunnel actually going under the Trinity channel itself.

Making the project even more difficult was the complex geology miners met along the way.

Unlike drilling through solid rock, this was “soft soil mining” that cut through not only 15 faults, but groundwater as well. And, to shore up the unstable soil in the tunnel, workers had to install precast concrete liners, in four-foot-long sections at a time.

“They would put two in the bottom and two in the top, then they would move forward another four more feet,” and do it all over again, Weaver said. “It was a stop and go process.”

“It’s good to see when it comes through and it does match what the survey shows,” said Jose Jimenez, the project manager for Southland Contractors.

Knowing everything it took; Weaver admits he was impressed.

“They were dead center. Their control was excellent,” Weaver said.

While this was a major milestone, the project will be far from boring going forward. Another 14 tunnels will need to be drilled when the District starts construction on the line connecting Lake Palestine to the Cedar Creek Reservoir.

The Tarrant Regional Water District board at its July meeting approved a $21 million contract to construct 10 state highway tunnels. In 2021, there will be an additional contract for four long tunnels similar to the Trinity River tunnel in scope and scale. Other projects include constructing roughly 40 miles of 84-inch diameter open-cut pipeline and the Lake Palestine pump station.

Dallas, which would get the water from Lake Palestine, wants the pipeline operational by 2027.

“This is the biggest pipeline project we’ve done and with a partner,” said Weaver, who has been involved with the IPL since 2009. “It’s been stressful and challenging at times, but also very rewarding.”